Avoid the pitfalls, and it is all advantages… 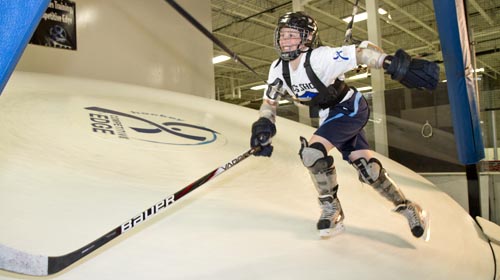 Oftentimes, the way skating treadmills are used is sort of a one-size-fits-all mode.  What we mean by this is treadmills are often used primarily as ways to build strength and conditioning within stride mechanics.  This is a great way to use them for a certain type of skater.

But for most youth hockey players, this just doesn’t fit.  And these people who are not a fan of skating treadmills are seeing poor results from scenarios where treadmills are used as a strength and conditioning focused tool with the wrong students.

To understand why this could be, we first must understand the training concept of transferability. This concept basically compares to motor control tasks (skills) to see how similar they are.  If two tasks are highly similar (say throwing a football and throwing a baseball) we can expect improvements made by working on one of these to transfer to the other. If they aren’t similar say a bench press and throwing a baseball, even though they involve a lot of the same muscles, we cannot expect much transfer from one to the other by improving one of them.

So, how similar are skating on a treadmill to skating on ice?  Indeed, they are highly similar tasks, and we should expect a high degree of transfer.

But, if things are not identically the same, the high level of transfer between the two can lead to a danger.  That danger is that a habit that works efficiently for one but not the other can transfer to the other if it is trained repeatedly enough. We hear about this with people who play both softball and golf where their softball swing “messes up” their golf swing. We could imagine that a baseball pitcher who over-trains as a quarterback in football would create some confusion in his pitching motion.  As treadmill skating and ice-skating are very similar but not identical, this is a risk we have to account for.

So how do we do it?  Here are some of the biggest issues in using skating treadmills to train for hockey skating…